Professor Andrew Lloyd is the only advisor to the National Disability Insurance Agency regarding the debilitating neurological disease Myalgic Encephalomyelitis, a type of Chronic Fatigue Syndrome (ME/CFS). A poster for a study being undertaken by his ‘Fatigue Clinic’ at the University of New South Wales asks the sexist question “are women with CFS ovary-reacting?”

ME/CFS is a life altering disease that affects not just the nervous system, but the gastrointestinal, cardiovascular, endocrine, immune and other systems in the body. Up to 240,000 Australians have ME/CFS. It is estimated that a quarter of those are bed or house bound. Others may be able to work but all will have severely affected quality of life. There is currently no known cause or cure for the disease.

Across the country thousands of people with this disease are being refused access to much needed supports through the NDIS, and many more refused access to the Disability Support Pension. These policy decisions are a direct result of Prof Lloyd’s outdated recommendations for patients to undergo Graded Exercise Therapy and Cognitive Behaviour Therapy as curative treatments, or methods of reducing the symptoms of their disease.

However, Graded Exercise Therapy has been shown to be unsafe for people with ME/CFS. Cognitive Behaviour Therapy is a psychological treatment that was first recommended before biological evidence of the disease was discovered. While a very small number of patients has improved with Graded Exercise Therapy, neither treatment has been shown to be statistically effective treatments for the disease defined by the leading international criteria.

ME/CFS effects four times as many women as men. This ratio is the same as autoimmune diseases. The disease has a history (and, all too often, current reality) of sufferers not being believed, misdiagnoses, conflation with psychosomatic diseases and mental illness, and labelling with terms such as hysteria.

Historically, hysteria was a diagnosis given exclusively to women originally described as having wandering wombs, but later to describe high levels of sexual desire, emotional outbursts or nervousness. Not only is hysteria not an actual disease, it’s history as a label men placed on women for exhibiting natural behaviour makes it a touchy subject for modern women who’s health concerns have been disbelieved or downplayed. Even in modern times, the term hysteric is used to describe overly emotional people.

While the relationship between patients menstrual cycle and the severity of their symptoms is an under-researched area, it would be incredibly problematic if the sentiment in the title of the poster for this project permeated the research design. There is a huge amount of poorly designed, unethical, and poorly executed research on this disease and a dire need for high quality biological research. It would be terrible if the University of New South Wales was spending scarce research funding to rekindle outdated views of women’s health. 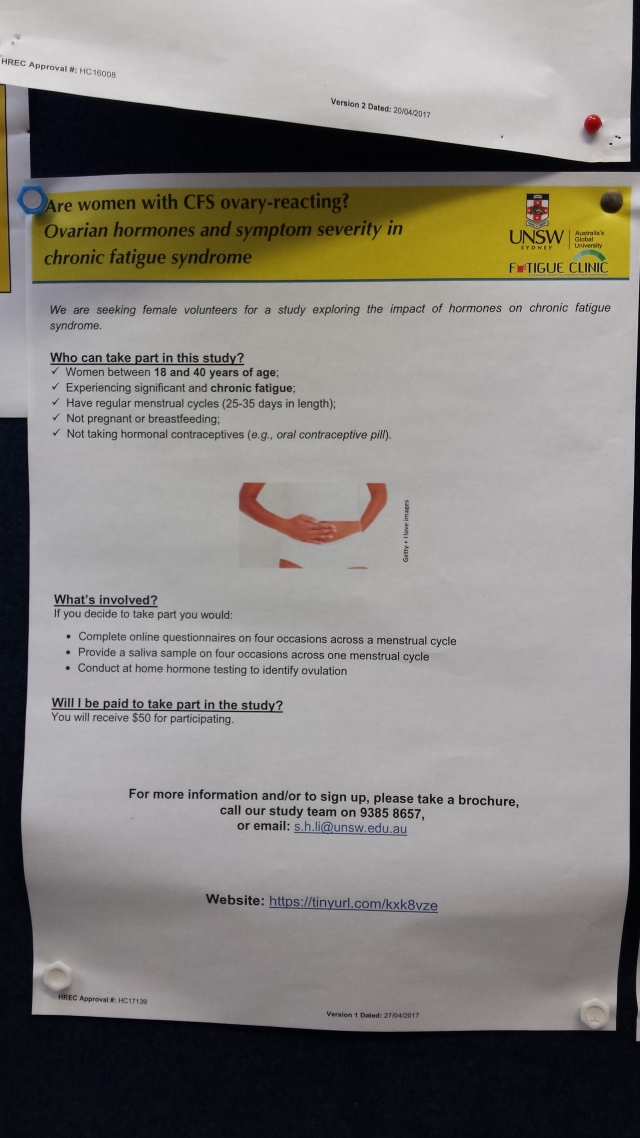