Today, the United States has a new President. At the inauguration of President Donald Trump, he gave a speech drawing on the many populist lines he used during the election campaign. There is one common thread between the words spoken by Obama and by Trump. Both men talk about the presidency as the people.

Obama talks about his presidency as by the people, continuing to pay homage to the community organisers who worked to turn the democratic agenda we see in his campaigns, into reality. Key themes of the Obama presidency were change and hope. In his farewell address at Chicago, after reminding people of the key achievements of the administration he said “that’s what you did.  You were the change.  You answered people’s hopes.” He closed with another call of faith. “I am asking you to believe.  Not in my ability to bring about change – but in yours.”

Trump talks about his presidency as for the people. In his inauguration address, Trump said the day marked a “transferring power from Washington, D.C.” to “you, the people.” He said the recent victories of politicians “have not been your victories; their triumphs have not been your triumphs; and while they celebrated in our nation’s Capital, there was little to celebrate for struggling families all across our land.”

But when Obama spoke about “the quiet dignity of working people in the face of struggle and loss” there seems to be an honesty to his words. Despite having graduated from the best schools in America, Obama’s roots in community organising show he has an empathy that seems a stark contrast to Trump. It is his policies that have meant health care costs are rising at the slowest rate in 20 years. It is his policies that bought America back from a great recession. It was under his government that unemployment was cut in half and the American economy saw the strongest two years of job growth since the ’90s.

When Trump said “the wealth of our middle class has been ripped from their homes and then redistributed across the entire world” there is a hollowness to his words. Trump, born a billionaire went on to say that “we will follow two simple rules: buy American and hire American.” However, he could not even manage to have his own campaign made in America. The ubiquitous red ‘Make America Great Again’ caps that dotted the crowd and were a hallmark of his campaign, were made in China, Viet Nam and Bangladesh. 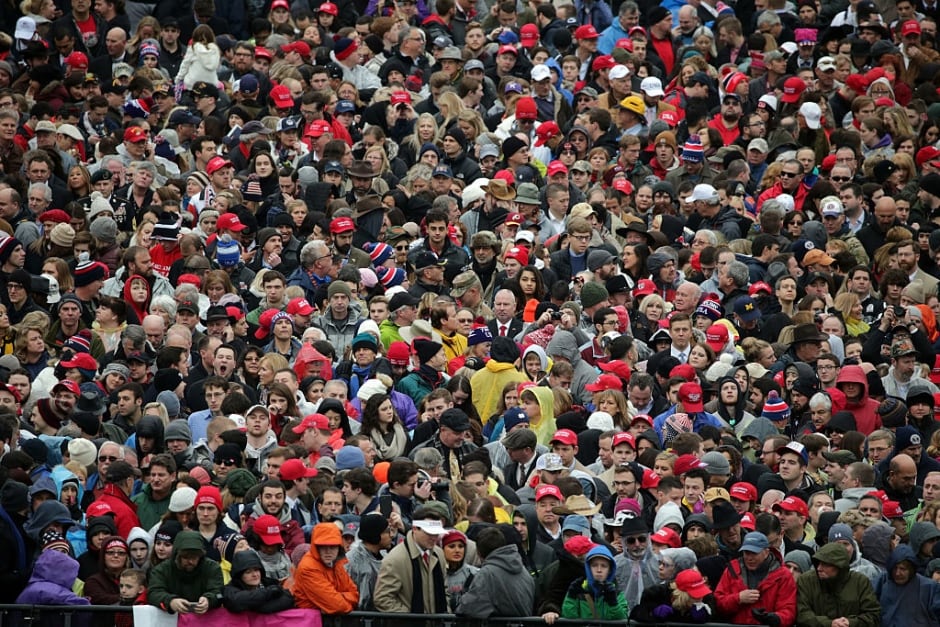 “What truly matters is not which party controls our government, but whether our government is controlled by the people. January 20th 2017, will be remembered as the day the people became the rulers of this nation again. The forgotten men and women of our country will be forgotten no longer. Everyone is listening to you now.” Who does he think he’s listening to? The 20 million Americans who will lose their health insurance when he revokes the Affordable Care Act? The majority of voters who cast their ballot for the policies and personality of Hillary Clinton? No doubt the line is actually an allusion to the so called ‘silent majority’ who surprised the pollsters by voting for Trump.

But when Trump went on to say that “that a nation exists to serve its citizens.” He also said “Americans want great schools for their children, safe neighborhoods for their families, and good jobs for themselves.” Herein lies the ultimate conundrum of Trump’s populism. A nation that exists to serve its citizens is one that welcomes the tired, the poor and the “huddled masses yearning to breathe free.” When the majority runs the country, what happens to the tired, the poor and the oppressed? What happens to the disabled and others with disadvantage?

Trump has appointed a Secretary of Education with no experience in education or public policy. Businesswoman, heiress and billionaire Betsy DeVos is an advocate for privatisation in education. With no experience working for students with disadvantage or on education inclusion she shows little prospects of addressing the chronic debt problem restricting millions of Americans’ access to tertiary education and at her confirmation hearing she was unable to support federal protections for children with disabilities to access education.

Trumps policy and staff choices also show little sign of being suitable for addressing key public safety concerns. Reducing gun violence and the number of people of colour shot by police must be a priority for public safety. Every day four children and teens are murdered with a gun, thirty two are shot in assaults and eight are shot unintentionally. In 2015, there were 372 mass shootings, killing 475 people and wounding 1,870. Sixty four shootings occurred in schools. According to data from 2013, incidents in schools and businesses represent seven out of ten active shootings. In 2015, young black men were nine times more likely than other Americans to be killed by police officers. Despite making up only two percent of the population, black men between 15-34 years old make up more than fifteen percent of all deaths from the use deadly force by police. Addressing this problem requires nuanced approach to policy and practice for race relations and law enforcement.

Thankfully, the market has shown signs of supporting Trumps efforts to create ‘good jobs.’ Hopefully, his efforts to regenerate national infrastructure and support a return of manufacturing will alleviate some of the poverty experienced in the rust belt, where a large portion of Trump supporters voted for him. How effectively Trump can achieve this, and what he does to ensure wealth is distributed across the country and reduce rising income inequality remains to be seen.

2 thoughts on “The trouble with Trump’s populism”